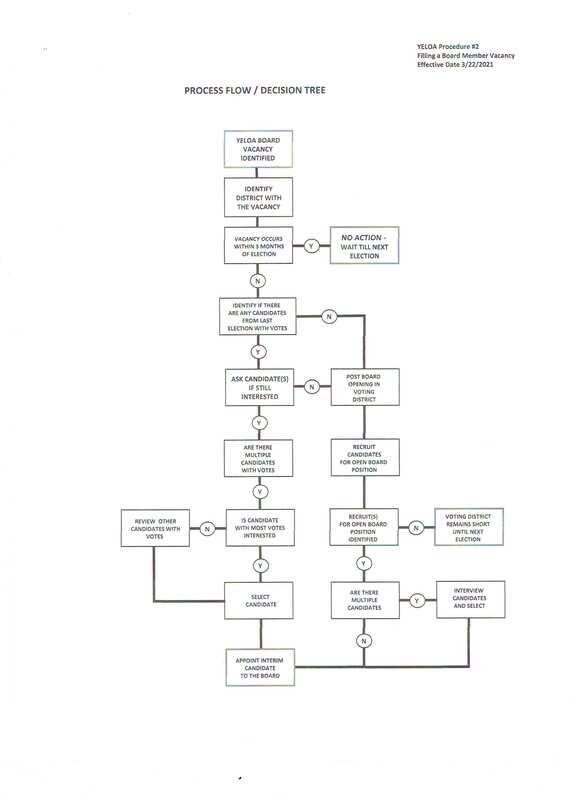 
Elections and the Election Process
Overview
This document identifies the process for the election of YELOA Board Members, defines the election process, and provides a procedure to accomplish those elections so as to be in compliance with Arizona law. It also provides for the creation of an election committee with a list of duties and responsibilities.

Call to Election – Formal notice of an upcoming election.

BIO – A brief biography of candidates who want to run for a board position.

Elections will take place every two years continuing from the election of Board Members on January 2020.

The Election process will be initiated in May of the year before each election.  The Board will send out a “Call to Election” notice informing all YELOA member households of an upcoming election. The notice shall include an Application for Candidacy Form and Biography Form for members interested in becoming a member of the Board of Directors.

Interested members should complete the Application for Candidacy Form and the Biography Form as provided or make a biography in their own format.  The Biography Form is optional.  The completed Application Form and optional Bio Form need to be submitted to the Board for inclusion in the upcoming election.

Interested Candidates must return their completed Applications for Candidacy  Form by the first week of October after the call to election notification in May.

The Board will compile ballots that include all candidates who applied to run for a Board position for distribution to all member households of YELOA prior to the election.

The Ballots and biographies will be mailed to all YELOA members households the first week of November along with the November Newsletter.  Members will get ballot with candidates that are running in their Voting District only to avoid confusion.  Only one vote per lot is allowed.

All received ballots, both mail-in and in-person, will be tabulated at the election meeting or immediately following the meeting, whereupon the results will be finalized. The election results will be made ready for the announcement of new board members before the regularly scheduled Annual Members’ Meeting.

An announcement of the new Board members resulting from the election will be made at the Members Annual meeting during the second week in January.

The new Board will meet the third week in January to elect Officers of the Board and to make an announcement of the new officers during the meeting.


Formation of an election committee to assist the Board in conducting elections.

Ideally the committee will be made of two members from each voting district.

The members’ responsibilities will include:

*Assisting in distributing paperwork and election information within the community

*Canvassing homeowners to get them more involved in the YELOA Association

*Assisting in collecting and tabulating ballot totals during the elections


Filling a Board Member Vacancy

Interim Board member – A person appointed by the Board to fill a Board Member position until the next Annual Meeting or until the next scheduled Election.

This procedure has been established to outline the process for selecting Interim Board Member positions that have been vacated over time. This policy is intended to help keep the membership of YELOA fully represented by Board Members from each Voting District.  The procedure includes guidelines and considerations for selecting candidates, the selection process, and timeline factors.  The procedure also includes a step-by-step Process Flow diagram with decision points to guide the identification and selection of Interim Board Members.

Interim Board members need to be selected in a timely fashion to assure and continue the best representation of the YELOA members on the Board.

The Interim Board Member selection process will include:  1) Considering candidates from the most recent election who received votes in the district with the vacancy who were not the winning candidates of that district.  2) Any other members of the district interested in becoming a Board Member.  3) Another factor to be considered will be how long the Board position will be vacant until the next election.

If there are no candidates voluntarily interested in becoming Board Members, then the Board will make every effort to recruit potential candidates to fill the vacant position.


The Interim Board Member Selection Process

A member resigns from the Board or a vacancy occurs for any other reason.  The Board will take actions to replace that member through a series of clearly defined steps at the earliest convenience.

The first action will be to accept the resignation and identify the voting district with the vacancy.

The Board will then review the results of the most recent election to determine if there were candidates, in the voting district with the vacancy, that received votes but were not the winners of the election.  If yes, the Board will approach those members to recruit an Interim Board Member.  The Board will ask the former candidates in order starting with the one with the most votes if they are interested in filling the position.

If the answer from all former candidates is no, then the board will start a recruiting process by asking for any YELOA member, in the affected voting district, if they are interested in becoming an Interim Board member.  If no members are interested, then the Board will undertake a brief recruitment effort to convince a member to fill the temporary Board position.

If the Board has no success finding an Interim Board member, then the vacancy will remain until the next scheduled election.